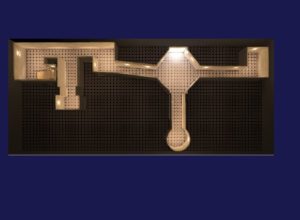 In the Christian age the cemetery crypt is used to designate the underground cemetery; a reserved term to indicate a long and narrow tunnel on whose walls the loculi and cubicula open up. 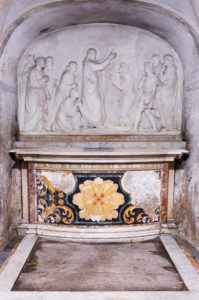 The entrance to the Cemetery Crypt of St. Agnes is located in the corridor leading to the Chapel of St. Philip Neri, where the relic of the head of St. Agnes is located.
Going down a steep flight of steps you will find yourself in the long underground corridor that, passing under the Presbytery, reaches the corridor in front of the Sacristy of Borromini, thus crossing the whole Church.
Along the walls there are the burial niches where the ancestors of the Doria-Pamphili family are buried, until the edict of Napoleon, who ordered the burial outside the city walls. In the middle of the corridor there is a niche where there is an altar surmounted by a bas-relief. 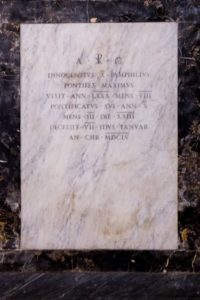 In the corridor in front of the altar is buried Pope Innocent X.
Pope Innocent X, who died on January 7, 1655, buried in St. Peter’s, in 1677 the body was moved and buried in St. Agnes, in the Chapel of St. Francesca Romana, where it remained, it seems forgotten, until 1838, the year in which it was moved to the Crypt, where it is currently located.

From the Altar there is also a corridor that ends in the middle of the Church above, right in correspondence with the rose window in the centre of the floor. 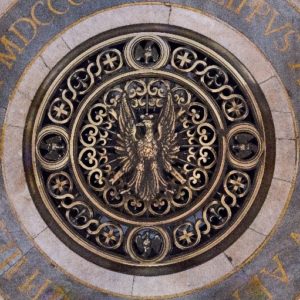 Among the various corpses buried in the Crypt (July 1829) there is also that of Teresa Orsini in Doria-Pamphili, whose Beatification Process is in progress, and whose Reconnaissance will soon take place.