(or Chapel of the Cranium of Saint Agnes) 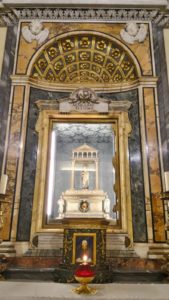 The Pamphili family had many ties with Saint Filippo Neri (1515-1595) and the Congregation of the Oratory which he founded. The decision was made to construct a chapel in his name within the family church, next to the chapel dedicated to Saint Sebastian, one of Filippo Neri’s favourite saints. Francesco Allegrini was commissioned to paint the ceiling fresco of the Virgin welcoming Saint Filippo to Heaven. The chapel was restored in 1859 under the architect Andrea Busiri Vici. It was at this moment that Pope Pius X directed that the cranium of Saint Agnes be removed from the Sancta Santorum and transferred to the chapel, where it was installed in a tabernacle in the shape of a temple.

The access to a monumental crypt containing the tombs of the Pamphilis is found in a corridor leading to the Chapel of Saint Filippo Neri. This area was restored in 1864, again by Andrea Busiri Vici.