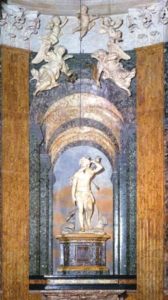 The chapel of Saint Sebastian is in the south arm of the church, directly opposite that of Saint Agnes. The two chapels share a common decorative scheme, drafted by Borromini. Among the distinctive features are the framing pilasters supporting a complex trabeation.

The statue of Saint Sebastian was sculpted between 1717 and 1719 by Pietro Paolo Campi, a student of Pierre Le Gros. It features the classical iconography of the period.